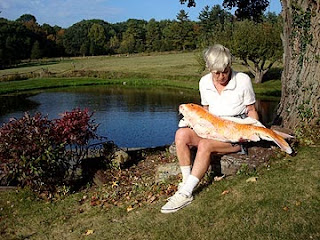 I must have written half a dozen columns on the harbingers of Spring - the first flock of robins landing on the lawn in a whir of wings, the sudden appearance of bright red buds on the silver maple just beyond my bedroom window, the goldfinches shedding their drab winter gray to don sunny summer feathers, the happy sound of peepers singing in the swamp.  This year for the first time in almost twenty years one of my favorite forerunners of Spring is missing - Golda Meir.

You probably remember my beautiful goldfish who died last summer at the age of twenty-five. Every April she would rise from the muddy bottom of the pond and hover beneath the inlet where I could greet her.  When she died I asked my readers if any of them could offer me a good name for my next goldfish.  I'm ashamed to say that I didn't keep a record of the 10 or 12 names I was sent, exept for the one I liked the best, Ben Hur, sent to me from Beret Woodworth.

Several readers also wrote to tell me the best variety of fish I should buy next, fish that are able to survive being dumped into a totally new environment.  If you're one of those readers, please send your recommendations again as I didn't keep those emails either.  I'm afrad that once read, I delete all too many nice emails.

This year there seem to be very few harbingers of Spring to be seen yet.  A few snowdrops and crocuses are the only cheerful sights I spied when I went out looking yesterday.  Did you know that the ancestors of the crocus resided in the tropics and had no bulbs?  As they migrated north to colder climates they developed this method of storage in order to survive.  It took untold millions of years to perfect such a clever tecnique.

If you slice down the center of a bulb - a daffodil bulb is easier to try than a crocus - you can see the pre-formed leaves and flowers packed tightly inside, waiting for the warmth and water that will swell them to their full size.  What would we northern gardeners do if crocuses and daffodils and other such plants hadn't figured out how to store the following year's growth in this form?

When I eliminated my Monet garden many years ago, turning the area into a lawn, I decided to plant crocus bulbs  as well as grass seed, but there was a problem.  Once the flowers of the crocus have faded, the plants need a certain amount of time for the slender leaves to store enough food for the next year's blooms. No garden book that I could find would tell me just how long that amount of time needs to be.  So the following spring  after these little darlings bloomed, I marked the calendar and waited until Memorial Day to mow the lawn.  At that point the crocus leaves were turning brown and the lawn looked like a hay field.

The following year I had plenty of crocus blossoms, but Memorial Day is pretty late to start mowing the lawn.  To make a long story short, I cut the lawn a little earlier each spring until the year when only about 3 crocus appeared.  Lawns are not a very good place to plant crocuses.  Fortunately the ones I've planted in the cracks of the terrace flagstones or in the flower beds do just fine.

A flower that rises almost as early as the crocus is the coltsfoot, a sad little yellow bloom that is most often found in large clumps at road edges.  If you see it only from a car window, you might easily mistake it for the common dandelion.  Look carefully, however, and you'll discover that even though the golden shaggy head is similar,, it is unaccompanied by the usual jagged green leaves.  In fact it doesn't have any foliage at all.

What an odd name, coltsfoot.  Was it a cure for hoof and mouth disease back in the days of our ancestors?  Maybe it grows in horse paddocks? With no leaves and a scaly anemic stem that couldn't possibly produce enough chlorophyll to support the blossom, could it derive its food from horse droppings?

I might never have found the answer had we not asked the town for its road sweepings many years ago to fill in a washout on our road to the upper pasture.  Salty sand seems an inhospitable environment for anything except hermit crabs to grow in, but that summer I noticed that it was supporting a large cluster of unfamiliar leaves.  The following spring I found dozens of golden coltsfoot flowers bloom in that same spot.

Sure enough, when I looked up coltsfoot in the garden encyclopedia (strangrly enough it is rarely included in wildflower books,) there was not only a picture of the blossom, but another of the leaves.

﻿According to the Encyclopedia the name comes from the fact that the leaf resembles a colt's foot.  It does?  I've never studied the hoof of a cot, but I can't imagine it looks like those leaves.  Obviously I'm in the minority, however,  as other names for the plant include horse hoof, foal's wort and bull's foot.

Coltsfoot's botanical name is Tussilago fargara, from the Latin tussis, meaning cough. The plant was brought to America by early settlers to be used as a remedy for coughs and other respiratory ailments.  The leaves were collected in small bunches, dried and then added to a variety of tonics.  They were also smoked as tobacco by asthma sufferers.  Why someone already having difficulty breathing would want to smoke even an herbal cigarette is a mystery more puzzling than the name coltsfoot.

I don't think I'd consider this ordinary little plant the most exciting harbinger of spring, but I guess that after this past winter any of Mother Nature's signs that warm weather is arriving would be pretty thrilling.
Posted by Weeds and Wisdom at 2:36 PM