A Corker of a Controversy

﻿﻿﻿﻿
﻿﻿﻿
I'm not much of a wine drinker, but a few weeks ago when I was helping host an art reception at the library I was looking around for the corkscrew when I realised I didn't need one.  All the wine bottles had screwtops. I turned to my fellow hostess in surprise. " Is the library getting so cheap it can't afford to buy good wine for these receptions any more?" I asked.

"No, no," she replied. "This is an expensive wine.  It's just that  most wineries have given up using corks.  Apparently they've discovered that screw tops are much better."

Sure enough, when I went on the Internet I soon learned about "cork taint," the reason why even the most expensive wines have screw tops nowadays.  Cork taint refers to the undesirable smells and tastes found in a bottle of wine, especially spoilage that can only be detected after bottling, aging and opening.  Other factors can be responsible for a bad smell, such as wooden barrels or poor storage conditions, but the cork is usually blamed, hence the expression "corked" when referring to a wine found to be tainted.

﻿﻿﻿﻿﻿﻿﻿﻿﻿﻿﻿﻿﻿﻿﻿﻿﻿ The chief cause of cork taint is the presence of trichloroanisole (TCA) in the wine.  The production of TCA results when a cork tree takes in chlorophenol, a compound which is found in many pesticides and wood preservatives.  More frequent use of such chemicals in recent years is possibly one reason the problem of cork taint has increased. Corked wine containing TCA has a characteristic odor that wine connoisseurs think resembles that of a moldy newspaper or a wet dog.  In almost all cases the wine's native aromas are reduced significantly, and a very tainted wine is quite unpalatable, though harmless.

A study of 2800 bottles of wine tasted at the Wine Spectator, at its facilities in Napa, California, showed that 7% of bottles were tainted, but the cork industry claims a 1% or less in their latest study. I'm afraid the debate between the cork industry and those advocating screw tops will undoubtedly be lost by the corkers.

How sad!  I guess I shouldn't feel nostalgic, but I felt the same way when I finally gave up my wooden tennis recquet for the new one Hank and I referred to as a "fat head."  All this talk about wine corks also recalled vivid memories of the vacation we took in Portugal when we saw many cork forests. ﻿﻿

﻿﻿﻿﻿﻿﻿
﻿﻿﻿﻿﻿﻿
"Forest" isn’t a good description for the large fields where  cork oaks grow. Since these handsome trees usually live for about 150 years and spread their branches over a wide area, they are planted at least 20 yards apart.  The ground beneath them is usually plowed and seeded with sheat.  Once the wheat has been threshed, flocks of sheep are allowed to graze the stubble.

The first cork bark is harvested when a tree os 15 or 20 years old..  The process involves making a circular cut around the base of the trunk close to the ground and another one where the tree begins to branch.  This layer of cork bark is then peeled away.

The first time Hank and I drove through a cork forest we both winced as we saw the trees that had been cut that year.  They looked terribly  raw, and tender,  their trunks a shocking color, as deep red as a Hereford bull.  We felt so sorry for these poor skinned trunks that we finally stopped the car to see them up close, and much to our delight discovered that the velvety looking new bark felt as strong and rough as the bark of trees that hadn’t been skinned.

To protect future harvests, a law requires that each cork tree be marked with its harvest date and cannot be cut again for nine years. All those sore-looking red trunks were marked with a “0” representing 1990, the year we were in Portugal, while those marked with a “9” for 1989, were the rich brown of a thoroughbred horse.  Trees that had been cut in earlier years had turned from black to gray as the outer bark grew thick (from the inside out) with new cork.

A one-inch cube of good cork has about 200,000,000 air-filled cells, the reason it can be compressed to make good insulation. Virgin cork, the first stripping, is of poor quality, but surprising though it may seem, does no harm to the tree and in fact stimulates it to make better and better cork.

So now you know that the marvelous picture of Ferdinand the Bull sitting under a tree full of dangling corks is not for real.  Cork bottle stoppers don’t grow on trees.  Neither do bulls behave like Ferdinand. I speak with authority about that as the highlight of our trip to Portugal was a bullfight.

The bulls in Portugal are neither dairy nor beef cattle, but a fierce breed known for their propensity to charge without the slightest provocation. Well before the event we were convinced by several knowledgeable Portuguese that the barbed darts and lances which pierce the thick layer of fat on a bull’s neck during the performance are no more than pin pricks to the bull and are  not used to anger him.  He’s already furious by nature. 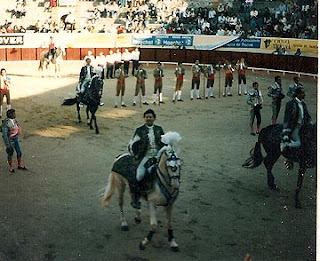 After a glorious parade of matadors and picadors marching around the arena to stirring band music and dressed in silver embroidered costumes,  the fight between a snorting, pawing, swaggering bull and a superb horseman called a rejoneador begins. Making a terrified, dancing horse prance directly toward a charging bull is a breath-taking feat to see.  And to watch the rejoneador deflect his mount at the last second and thrust a lance between the charging bull’s shoulders left us gasping.

Once the horseman has succeeded in putting his three lances and three darts in the bull to a background of marvelously dramatic band music, an even more spectacular event follows.   With a fanfare of trumpets, eight young men vault into the ring and line up opposite the panting irate bull.  The lead boy, arms crossed with great bravado, stalks toward the bull shouting taunts until the animal thunders toward him.  With split-second timing, the boy leaps onto the bull’s head and the other seven boys try to stop the bull’s charge before he reaches the other side of the ring.

I say “try” because it doesn’t always work, in which case these macho volunteers all scatter, leap over the wall or fall down and protect their heads from trampling hooves. Heart in my mouth, I sat through this amazing performance by six different bulls, not one of which resembled Ferdinand.  Each bull eventually became dizzy from going in circles, trying to shake the last macho male from his tail, at which point he joined a herd of fat lazy steers brought into the ring and led them out the gate.

No bull is used for more than one bullfight.  If he’s been especially good in the ring he is then used for breeding.  If not, he ends up on the dinner table.  You’d think such an angry creature would make tough meat, but we were told that it is twice as tender as that of regular steers.
Posted by Weeds and Wisdom at 1:13 PM