The Children of Perennials 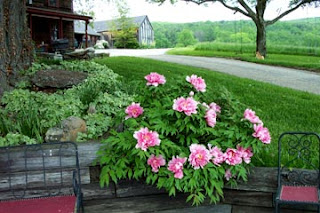 Regular readers of Weeds and Wisdom all know what a parsimonious old Yankee I am, and since opposites attract they've probably guessed that Hank is a charmingly generous fellow.  By the time our three daughters reached their teens they'd come to their own conclusions about managing money.   One handled her finances conservatively, but not as tightfistedly as her mom.  Another was a free-spender, generous beyond her means.  The third saved and hoarded her money for months, then suddenly would splurge to the point of being stone-broke. Of course now that all three are married their spending habits are not my concern.
Having just come in from dead-heading iris and dozens of spent daffodils in the flower border, I've decided that perennials are like children in how they handle their lives.  Despite the fact that they're raised in the same bed with the same love and care and basic rules to live by, they all have different ideas about how to get on in life. Some are overly generous with their seeds, squandering them all over the place while others don't bother producing any seeds worth counting.
Chinese forget-me-nots are real profligates.  Each year these heavenly patches of blue that dot the border in early May throw away their seeds like rich American tourists scattering dollar bills.  They end up so destitute that they wither away.  The next spring their children are so numerous they form a new sea of blue in the border.
The little daisy called feverfew is not quite so extravagant.  It, too, scatters seeds that soon grow into new plants, popping up in all sorts of unexpected places.  But unlike forget-me-nots, feverfew parents keep hanging on tenaciously the following year.  I uproot these old plants and let the children take their places.  If the parents are allowed to stay a second year their tough old stems must be cut down with a clipper to make them look respectable.
Phlox is a pretty conservative perennial, rarely self-seeding.  Its clumps get a little larger each year and needs some thinning in late spring but otherwise take care of themselves.  Once in a while though, a weed like bedstraw or vetch will sneak into a clump and establish itself so firmly that there's no removing it.  At first it just looks ugly, but after a few years it may dominate the clump.  Then it's time to dig up the phlox and throw it away.  Replace it by dividing another clump that's weed-free.

Iris propagates itself by adding offshoots to the end of its rhizome each year.  Eventually these extensions crowd each other and need replanting or they'll get root rot, a very unattractive disease.  Less crowding will occur if you plant the rhizomes in a circle so new growth forms away from the center. Do this in July when bloom is past but there's still time for the new planting to get re-established. The self-centered peony just gets bigger and better without investing in anything but itself. The tree peony in my photo gets even more spectacular each year and has the additional advantage of having sturdy stems that don't require staking.  Unlike many perennials which offer the gardener new plants if allowed to self-seed, the peonies don't seem to care about producing offspring.  Deadheading these handsome perennials is merely for looks.
I've never minded the job of deadheading.  I love walking down the border on a dewy spring morning, breaking off the dried-up fleur-de-lis of iris  that have finished blooming, or removing the spent spires of lobelia as dusk settles on the October garden. What I don't like is the name - deadheading. I just looked it up in the dictionary and was surprised to find the first definition was "A person who uses a free ticket for admittance."  Three more definitions preceded the one about pulling dead or dying blossoms from a flower.
Well, whatever it's called, it varies from one perennial to the next. Some plants such as Shasta daisies look brown and ugly if their tired blooms aren't removed; others like astilbes can be left all summer long. Removing the finished blooms of delphiniums has its own reward, as this perennial will often produce a second bloom.
Then there are greedy perennials that may not produce lots of seeds but can take over areas of the garden as their roots expand.  Artemisia is a prime example.  Evening primrose and beebalm are two more.  All three need to be kept in check by pulling up their roots as they become too invasive.
Oh, I almost forgot one of the easiest flowers in the garden - daylilies.  These perennials have almost no faults. They are so hardy and grow so thickly that they are hardly ever attacked by weeds.  They carry on for years and years, just getting more attractive each year.  Yes, one has to cut off the old dead stalks in late fall or pull them (much easier) in early spring, but that's it until you decide to divide one and get two.
And that's one of the greatest things about perennials.  What a mathematical miracle - divide and you're multiplying. For this old penny pincher all those "freebies" are a treat.  After dividing and multiplying I feel just like Lady Bountiful as I give away the extras.

Posted by Weeds and Wisdom at 7:12 AM