A New and Different Perennial

I just looked up the word perennial in the dictionary to see if it fit the plants in my perennial border.  "Appearing again and again; continually recurring." Hmm. I guess that's a fair definition, provided your plants aren't killed by winter frost or summer drought, aren't attacked by insects or crippled by disease and are divided periodically.  I'm lucky if my hybrid lupines last three years, and my delphiniums only last one if we have a dry summer.
There's one perennial, however, that requires no care at all and literally lasts forever.  It needs no watering, fertilizing or dividing, and can add interest and even grandeur to the garden.
Rockus perennialis is more commonly known as a boulder.  The Asians are the experts in using rociks in a garden. To them a stone is a pure piece of nature, unaltered by man.  Silent, unmovable and permanent, stones suggest eternity.  Not just any old boulder will do, however.  It should be picked for its color, texture, surface, grain and sometimes the sound it produces when struck.
According to the Chinese, a flower brings butterflies, a willow brings the oriole, a pine the wind, a pond the croaking of frogs, while the rock promises the cheerful chirp of the cricket and invites cloud formations. A rock's natural line and composition can be as beautiful as a winding river or a sailing cloud.  One with cracks, veins of white or pink marble, or perforations which allow wildflower seeds to nestle and grow, is particularly desirable.
Back when Hank and I lived in Fairfield, I had a wild garden, a most appropriate place to plant a few good-looking rocks.  Hank made a drag cart for Pipsissewa, our burro, which enabled Pippy and  me to bring home several spectacular boulders covered in moss and lichens, and one that actually had a wild columbine growing in a crack.

Locust Hill, surrounded by 40 acres of open meadow, had no shady  place for a wild garden or handsome rocks. As a consequence, we planted none until  1990.  Elihu Carlson, our favorite bulldozer man, was coming to do some landscaping.  The day before he arrived with his backhoe, I mentioned to Hank that I'd found a special stone in the woods I wanted to bring home and use as a seat beside the sauna, the little round building at the end of the lawn.
Before I could describe the rock or its location Hank said "It's that great flat stone by the brush pile at the edge of the heifer pasture, right?  Soft, reddish color, about two feet high, smooth as glass on top?"
Well, no question but great minds think alike.  We'd never discussed this natural stone seat, but had obviously both been eyeing it for years.  Elihu scooped it up with his backhoe, carried it across the meadow and "planted" it.  There's something very nice about sitting on this sun-warmed seat after a summer night's skinny dip, and since we planted the weeping hemlock behind it, the rock looks as it had been born there. 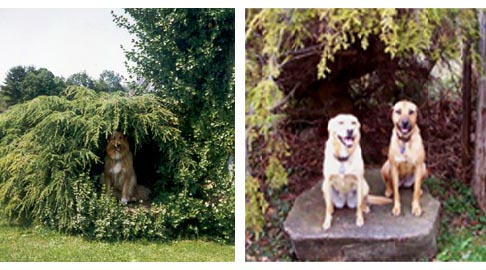 When I started writing this column I had in mind using an old photograph of Bigger, our Collie-Shepherd, sitting on the rock, but when I got it out of the album I realized that you couldn't see the rock at all. I decided to use it anyway and convinced Clover and Rumple to take their turn on the rock for a new photo.
Stones with strange shapes, irregular surfaces or striking veins of color can be an excellent focal point in the garden.  Our rock seat is a little boring, except for the fact that it makes a fine place to sit. We have far more interesting boulders in our woods, craggy and mossy, but so far I haven't found an appropriate place to put one.
I realize that not everybody has a backhoe or a woodland filled with interesting stones, but did you know that garden nurseries sell landscaping rocks? I have a friend in West Hartford who purchased  a red rock from Cassio's Nursery that is shaped just like an old man's head.
Think about these easy-care perennials.  Wouldn't it be nice to have a perennial that really was perennial?
Posted by Weeds and Wisdom at 1:39 PM