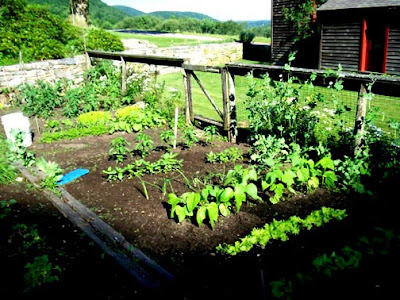 I’ve just been going through my Website’s Archives to see what columns I’ve already written about Autumn -  fall chores, Jack Frost, turning leaves, October’s flowers,  and a half dozen other appropriate subjects. I seem to have covered every aspect of what gardeners go through at this time of year.  Since I’ve been writing garden columns since 1982, I suppose that isn’t too surprising, but it does present a problem – what new and different feature of October can I write about that won’t be a repeat of an old column?
As I reread some of those earlier columns, however, I found that I hardly remembered most of them, so why should you?  And since a gardener’s summer varies from year to year depending on the weather, I’m going to stop worrying and give you a review of Locust Hill’s  2010 vegetable garden.
Talk about weather!  Global warming certainly turned into one hot summer, and every sort of vegetation grew fast and furiously, didn’t it?  Having ripe tomatoes in mid-July was a delicious treat. And no tomato blight to ruin the harvest. That warm weather turned everything in my vegetable garden to speed demons, which was both good and bad.  The peas climbed up the fence and toppled over to start down the other side. I’d much rather have had them put their energy into the peas. They had hardly any flavor at all.
The same sort of problem was caused by my string beans.  I planted a row of bush beans right between a row of onions and a row of radishes as I usually do.  A few weeks after they appeared they stopped sitting up and began looking around for their poles, at least that’s what it looked like. Did I buy pole beans instead of bush beans?? No, the packet of seeds had “BUSH BEANS” in large letters.  Stupid seed company!
I did not want pole beans shading my radishes and onions.  But what’s a gardener to do?  I gave each plant a pole to climb. I also gave each plant a demonstration of how to wind itself around the pole and climb. Not one plant took my advice. In a week they were sprawled over the ground and smothering my radishes. Obviously they were bush beans gone wild with the heat. They produced an adequate crop of beans, just a bit muddy from lying in the dirt.  Fortunately they left my onion row alone. As for the radishes, I planted another row in a safer spot.
The rest of my vegetables behaved normally.  As usual the zucchinis got as big as Goldie, the goldfish I wrote about in my last dozen cantaloupes column, before I could harvest them. I had two-foot long cucumbers, a crop of about a dozen canteloupe that were quite tasteless, three planting of delicious lettuce, and a row of zinnias that were really spectacular
Here it is almost the 10th of October and still no frost.  I guess that’s another affect of global warming. I suspect it will be well worth covering tender crops for that first frost because it will probably be followed by many weeks of warm weather.  Predicting when or whether a frost will hit is tricky even for the weather man.  He probably uses the dew point to help him. The whys and wherefores of the evening dews and damps and that thing called a dew point can be pretty confusing, but very helpful in predicting frost. Dew is the result of water condensation.  As air cools it is able to hold less and less water vapor.  When it can hold no more, the water vapor condenses forming dew, and the temperature at that exact moment is the dew point.
When dew forms it releases energy and that energy keeps the temperature near the ground at the same level as the dew point.  Therefore if the dew point is hovering in the low 30s, prepare for frost.  If the humidity is high, so is the dew point. A night of dry air, no wind and clear skies indicates a low dew point and you'd be wise to cover all the tender vegetables with blankets or buckets.