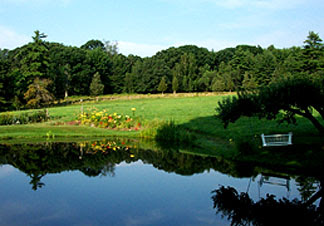 There are lots of flowers I like better than daylilies, but I have to admit they have some sterling qualities. The plants last for many years and produce new flowers every day for many weeks; they adapt easily to that magical formula - divide to multiply. And best of all, they rarely need to be weeded. With all these attributes, daylilies were what I chose last year when I decided I needed a flowerbed I could see from the terrace at the front of the house.
I have a perennial border that stretches 100 feet in front of the sheep pasture's split-rail fence, but it can't be seen from the terrace where we spend much of our time. I wanted another flowerbed to weed about as much as I craved an aching back, but the idea of looking across the pond at a colorful display of blooms overcame my common sense. Fortunately preparing the bed was surprisingly easy since the bank on that side of the pond, unlike most areas of Locust Hill, contained no stones or nasty clay soil. It was made up of the excess sand we'd used as a base when we built the pond.
The field grasses that grew on the bank had very little to hang onto and I was able uproot them with ease. The half-dozen clumps of daffodils I'd planted there in previous years (rarely noticed as they bloomed when it was usually too cold to eat on the terrace) I left in place. In fact by the time I started planting the daylilies, I'd forgotten the daffodils were there, and periodically found myself running into them as I dug my holes.
I had several common lemon lilies in the perennial border that I divided to make a start on the new flowerbed, and my friend Angie gave me some she'd divided, but I wanted a few really exotic daylilies as well. I waited patiently - no, impatiently - for July when Gerald Hardy has his yearly daylily sale in Falls Village.
The Hardy daylily gardens on Sugar Hill Road are something to see - two solid acres of daylilies showing off their colors is quite a sight. Mr. Hardy and his wife Marilyn have been raising daylilies for 25 years. They hybridize over 1000 plants from seed each year, producing many unusual and beautiful new varieties. This year's sale has started and will go on until August 17th - Thursday through Sunday, 9-5.
When I went to buy my daylilies, I kept going round and round trying to make up my mind which ones to choose. Most are sold by the "fan", so a large plant with three or four fans is far more expensive than one with a single fan. There are also very reasonably priced lilies for landscaping. I bought three fancy hybrids, each with only a single fan, and three that were large enough so that in only a few years I'd be able to divide and multiply them.
The bed still looked pretty sparse after I'd planted all these treasures, but I knew that eventually even the beginners would begin to fill in the spaces. In the meantime, however, I knew just what would fill those spaces - weeds. So, having learned that North Canaan's transfer station offers free mulch to anyone in town, Hank and I drove over and watched as an enormous bulldozer scooped up a bucket load of beautiful looking mulch and slowly dumped it into our pickup. Between us, grandson Eli and I spread it on the daylily bed.
That fall my friend Noreen brought me a dozen Asian lily bulbs. Not having a better place to put them, I planted them in the empty spaces in the new bed. I didn't have a clue as to their colors, so I just hoped they wouldn't clash with the daylilies.
Nothing is more fun than watching a new garden project come into its own. I could hardly wait to see what sort of display the new bed would make this summer. The Asian lilies were the first to appear. The pinky red ones were so short they could barely be seen. The yellow ones just grew and grew and grew until some were four feet tall before they put forth their huge blossoms.
A gardener can't expect to get everything just right the first time around. One has to learn about sizes and colors and bloom time in order to arrange the plants artistically. By the time the daylilies began to bloom I knew I had my work cut out for me. Tall plants were hiding short ones; all the yellow blooms seemed to be planted next to each other; the creamy white lily was buried behind a deep maroon one.
So yesterday I went out to tie up the stems with different colored yarn in preparation for the big rearrangement come fall. Where to start? An hour later I hadn't tied my yarn around a single plant - too busy weeding all the Queen Ann's lace, vetch and bindweed that had happily moved into the bed from the big meadow just beyond the bed. Tonight I'll make a plan and tie up just the ones I need to move.
By next summer when the youngest plants have grown up and filled out, and the color scheme has improved, the bed should look much better, but in the meantime, I wanted to show you the unexpected pleasure I'm getting this summer. Whenever the wind drops out and the pond becomes as smooth as glass, I have a double flowerbed as all those colorful blossoms are reflected in the mirror of the pond. At dawn one day last week when not a single ripple broke the surface of the water, I caught a photo of the reflected flower bed showing off its colors in the pond.