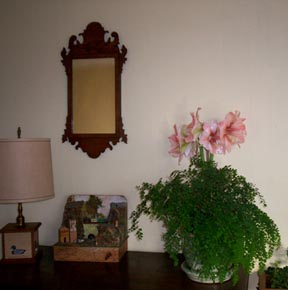 I've been thinking about the many things that start out life in an unappealing fashion but eventually turn out to be a delight.  What could be more unattractive than a scrawny baby bird, unadorned with feathers? But soon it is transformed into an eye-catching cardinal or a bluebird.  How about the first scraping of the bow by a beginning violinist?  Maybe he will turn into another Yahudi Menuhin.   Even a wrinkled and bald newborn baby isn't very appealing - provided, of course, that it isn't your own -  but everyone loves a smiling little two-year-old.
One of the homeliest  newborns I can think of is the amaryllis. It's hard to believe that that naked phallic-looking stalk will ever turn into a beautiful plant.  I was given my first amaryllis one Christmas many years ago.  It was so ugly I hid it behind a spider plant and almost killed it by forgetting to give it any water.  What a shock to suddenly notice two  huge pink blooms poking up above the spider's graceful leaves.
I still wasn't very enthusiastic about the amaryllis, however, and discarded it once it had finished blooming. Because I'm inclined to use a few white lies in my Christmas thank-you notes,  I enthused to my friend about her thoughtful gift, and as a result I received another amaryllis the following year. Because I had a nice Boston fern that needed repotting, I  transplanted both the fern and the amaryllis to a larger pot, the phallic stalk nicely hidden at the back.  It produced not two, but four giant white blossoms over the Christmas holiday.
Since I'm a great believer in "Waste-not, want-not" and as  a beginning garden columnist needing subjects for my weekly columns, I got a few houseplant books off the shelf and began reading about how to care for that fat bulb so it would survive and bloom another year.  Following the directions, I cut the stalk off near its base when the blooms faded and continued to grow the plant in a sunny window.  In June I transplanted the bulb to a new pot and watered it freely through the summer, fertilizing it regularly.
In September I stopped fertilizing, reduced my watering and brought the pot indoors, storing it  in a cool room.  I'm not sure how well I followed all those tedious directions, but I never saw any indication that the bulb was still alive.  No ugly stalk emerged, and as I recall, I finally threw out the bulb. What a waste of time.  Back then buying an  amaryllis already started and ready to bloom cost about $5.00.
The amaryllis is a native of South Africa. Its lily-like blooms are probably the most  spectacular
of all houseplants. They've beome an extremely popular Christmas gift. For the first time in many years I was given one this Christmas.  It had two phallic stalks rearing up from its pot, so I quickly put it behind a large
maidenhair fern.  When the blooms exploded from those stalks, they were absolutely beautiful and at last count there were six of them!
Trying to get the bulb to bloom a second year is complcated.  I've tried only once and had no success.  If you received an amaryllis this year, and you're the sort of meticulous person who bothers to remove the skins from your tomatoes for your salad, dusts around your knickknacks once a week and always makes the beds every morning even when you have a headache, you can read the directions in any good garden book, and you'll probably have great success.  I've been told that some gardeners have amaryllis bulbs that are entering their third decade!

Posted by Weeds and Wisdom at 1:11 PM