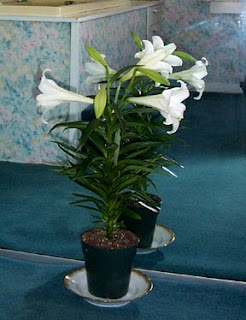 Happy Easter! Look what I got! Hank bought it, not for Easter but for our 50th wedding anniversary, a once-in-a-lifetime event. I read somewhere that you should remove the stamens before they shed their pollen so they won't stain those pristine white petals, but I think that removes the sweet perfume as well, so I've left them alone.
Back in 1989 (I do keep a garden diary sometimes) I bought my first lily.  We're not talking day lilies here, the large clumps of narrow leaves whose flowers bloom in succession, each one lasting only a day. These belong to the genus Hemerocallis.  Since they can be multiplied by division, daylilies are usually easy to obtain for free.
No, I'm talking about the lilies like the Easter lily that rise from a bulb on a single stem clothed in narrow 3 to 5 inch leaves.  These lilies, which include dozens of species, belong to the genus Lilium. The most common and easiest to grow are the Asiatic hybrids.  Their blooms last for many weeks, and continue producing for many years.  Unlike dahlias and gladiolas, all but tender varieties survive the winter in the ground.
Usually only lily plants already started in containers can be found in local garden nurseries.  That's because the bulbs don't keep well on store shelves. Ordering bulbs from a catalog means they will be dug fresh, refrigerated to keep their roots alive, and then shipped at planting time. Because the first lily I purchased came in a pot I was paying for someone else's planting efforts.
I liked it so well that I turned into a spendthrift and purchased two more the next year, also pre-started in pots.  A few years later I saw an offer in the Park Seed catalog for a tempting collection of 40 lily bulbs, five each of eight different varieties for $45.00.
I was not quite ready to get quite that many, but having decided lilies were a great addition to the garden,  I called two friends and asked if they'd be interested in splitting the collection - $15.00 each for approximately 13 bulbs, a real bargain.  We could fight about the colors when the bulbs arrived. Both friends agreed.
Unfortunately when the bulbs arrived, there were not eight packages of five, but fifty loose bulbs in a box  designated "landscaping lilies." I'd ordered the wrong collection by mistake. Both of my friends allowed as how they really didn't want their share of a bunch of lily bulbs in unknown colors, and who could blame them?
It was too late to exchange them, since Jack Frost would undoubtedly have turned the earth rock-hard by the time the correct bulbs arrived, so I found myself with all 50 bulbs and a bill for $45.00. Having just planted dozens of crocus and daffodil bulbs the previous week, I was none too enthusiastic about planting fifty more bulbs.  And like my friends, I wasn't eager to cope with all those mixed colors.  I'd not envisioned a "landscape" of lilies.  I'd planned to space mine along the perennial border.
Lilies require light porous soil and good drainage.  They prefer full sun on their blooms but shade at soil level so the ground will remain moist.  Bulbs should be planted to a depth three times their height, nine inches for a three-inch bulb! Since the plants do not show above ground until late spring, markers should be used so the bulbs won't be damaged by the forgetful gardener, happily planting other flowers in those spaces by mistake.
I planted a dozen of the largest bulbs in the perennial border, but I doubt if I managed to plant any deeper than six inches. I naturalized a bunch more beyond the dam of the pond. I gave away the rest to the first two people who drove in the yard - a deer hunter, who thought his wife might like them, and the UPS man, who happened to be a girl as well as a gardener.
These lilies were really spectacular in bloom. The first year those I'd planted in the border all produced large flowers.  Naturally I'd managed to plant a brilliant red one right next to a tangerine, a deep purple  just in back of a red astilbe, and of course two white ones right in front of a white phlox. A few years later I remembered to mark them when they were in bloom and transplanted them in more harmonious locations that fall.
Easter lilies are one of the tender varieties and rarely survive the fridgid temperatures of our winters.  I plan to try planting  mine anyway, as soon as spring warms up the earth.  Who knows, maybe it will prove to be a once-in-a-lifetime success.