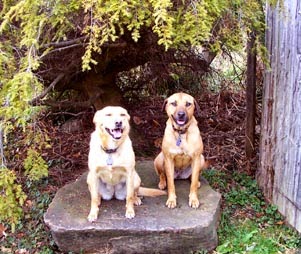 Arbor Day is celebrated in Connecticut on the last Friday in April, but to me it makes more sense to plant trees in the fall, not the spring.  Asking a new tender sapling to produce new leaves and possibly flowers when its most delicate roots, the ones that take in water, are often damaged in transplanting, must be tough. .  I think tree planting makes a lot more sense when done in September when all it  needs to do is establish itself and then settle down to sleep through the winter.

Locust Hill has lost all too many good trees in the past few years.  The first one to die was the weeping hemlock that Hank planted out beside  the sauna.  He chose it just for the kids as it made a perfect hiding place.  When the girls got too old to play in it, we found a beautiful flat rock  to put  in front of the hemlock so  we could sit on.  So could the dogs.

Two years ago the weeping shrub  began looking sick, and there were funny looking white places on its branches.  The tree expert who came to take a look claimed it was doomed.  The Wooly Adelgid was the culprit that killed it.

The next tree to perish on Locust Hill was an even sadder catastrophe, the huge sugar maple that provided shade for the front terrace. When we moved here in 1963 the maple’s trunk had a diameter the size of a gallon jug, but it grew faster than today’s national debt.  We soon learned why -  our family of 5 was feeding the tree  daily because the primitive septic system  was directly below its roots.

Fortunately Hank’s grandmother, knowing we hadn’t a penny to spare, offered to pay to have a new septic system put in.  From then on the maple grew normally until five years ago, 2009, when it suddenly began to look sick.  Neither of the two excellent tree experts who came to check out the poor tree’s problem had no idea what it could be. 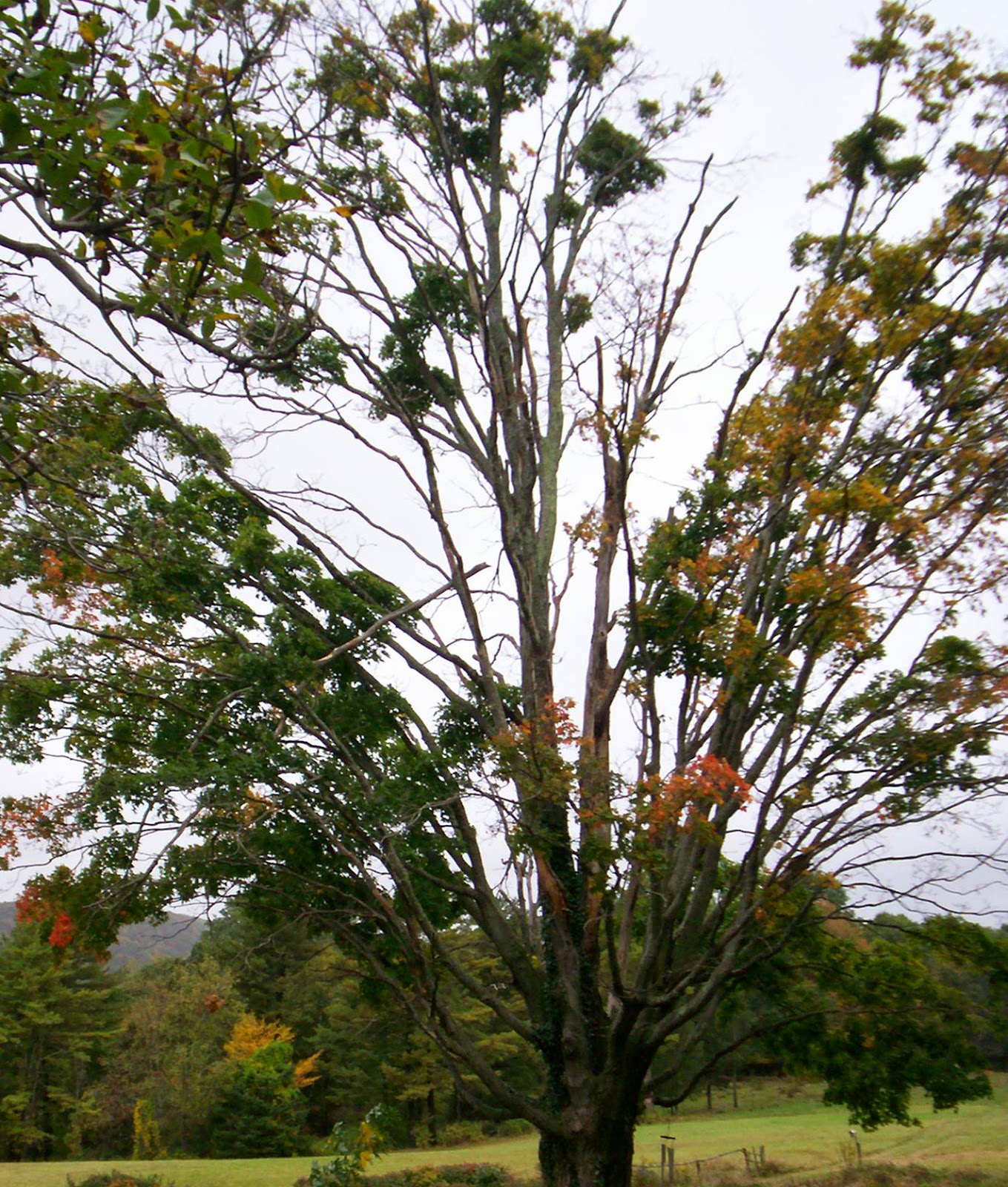 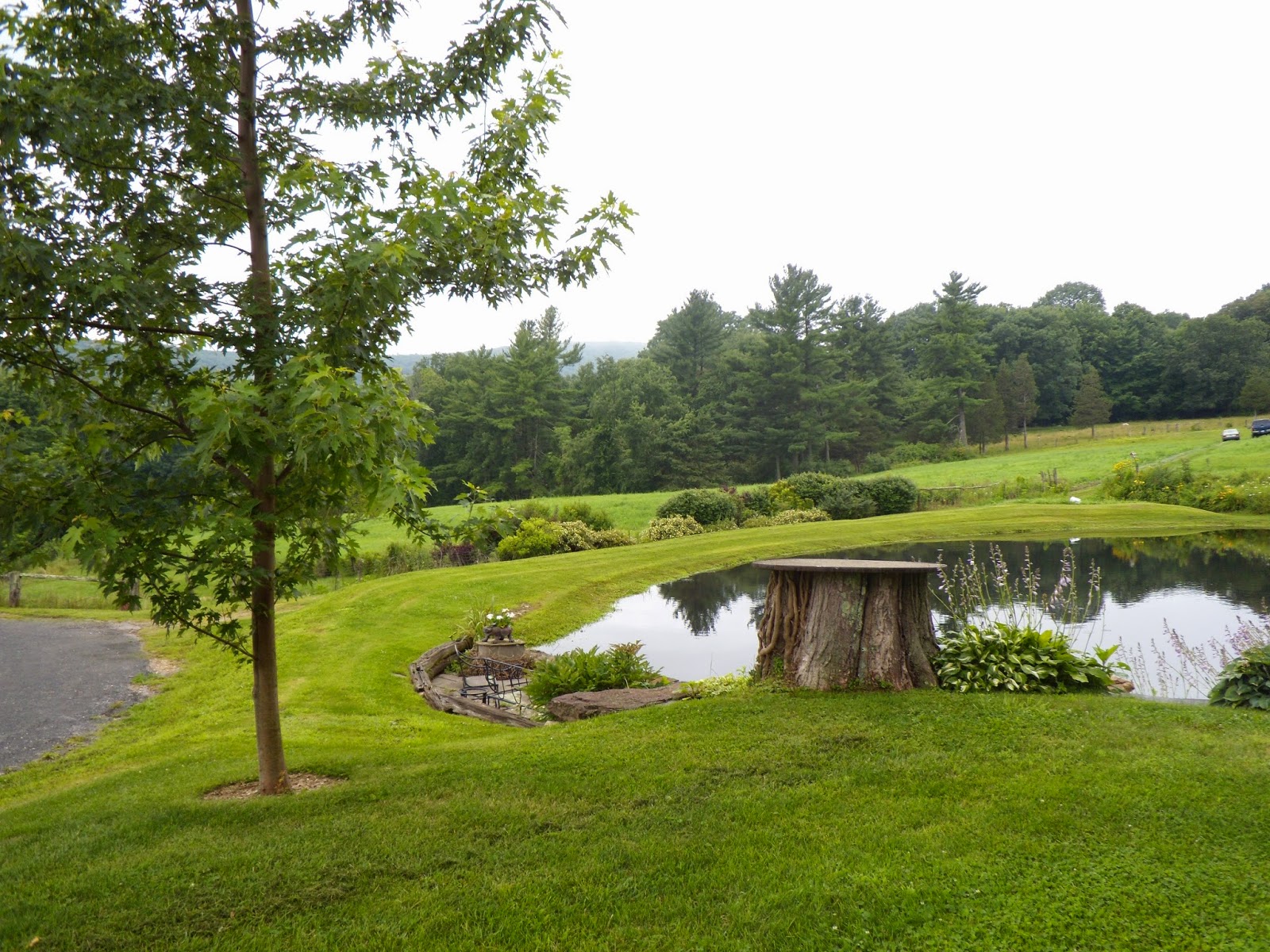 Our Carpathian Walnut, which gave us a bushel of delicious walnuts for almost 40 years was also sick, but we knew why – every limb had been drilled with holes by sapsuckers, so the tree no longer could produce nuts, Last fall  I had it cut down along with the sugar maple.  What a  lot of firewood  John and I stacked in the long shed with both those huge trees gone!

The apple tree  beside the pond will be the next to go.  It must be at least 100 years old.  Last spring when the limb supporting grandfather’s handsome swing broke off what was revealed was a trunk as empty as my memory when I try to remember a good friend’s name nowadays. 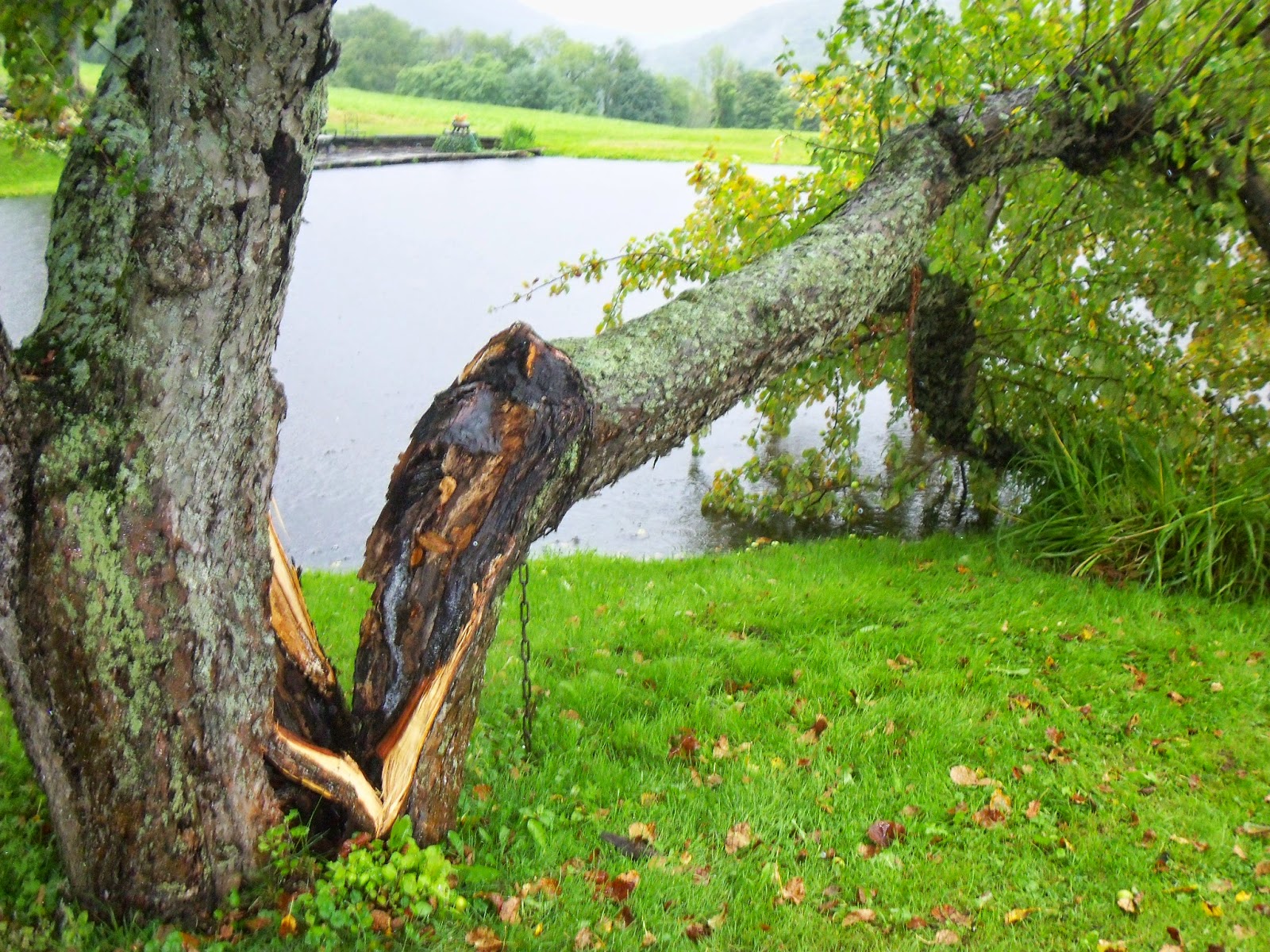 Fortunately its apples were always dry and tasteless and had never been worth harvesting.  Each fall they fell onto the lawn  where I had to gather them up so I could mow. This spring its leaves looked as sick as a puppy that's eaten a pile of rotten fish.

That ancient tree, however, had given us the perfect limb on which to hang Grandfather’s swing. With both the sugar maple and the walnut gone, there wasn’t a single tree near the house with an appropriate limb on which to put the swing, and I ended up hanging  it  from a beam in the long shed. 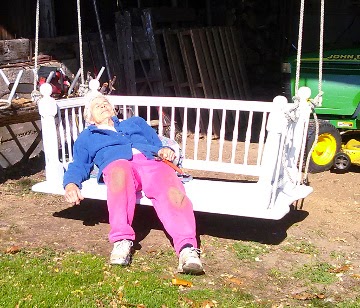 Now it’s time to figure out what new sapling I should plant in place of the apple tree.  I'd love a dogwood, but I don't think it would produce a sturdy enough limb.  Since I’ll be long gone by the time whatever I plant has a limb sturdy enough to support grandfather’s swing,  I think I must consult daughter Bridget who will inherit Locust Hill and get her thoughts on what to get.

I hope the trees on your property are all thriving.  If so, be thankful!

Posted by Weeds and Wisdom at 9:44 AM