Since the outside temperature is eight below zero this morning, January 23rd, and this is the only warm room in the house, I am composing this column, even though it's not due until February. I've just finished my morning's winter chores that I do every day, and wondering how many of you faithful readers have a similar routine.

Thank goodness I’m not hung up with all these jobs year round. My days do not start like this in spring, summer or fall, just in the wicked winter.  Nowadays it starts when Coco, my new beagle, who sleeps in her crate all night, begins to howl.  If I’m unlucky, it can start as early as 5:30, a forlorn but loud barking that I have never managed to ignore. Today I was lucky.  The howling didn’t begin until almost seven. 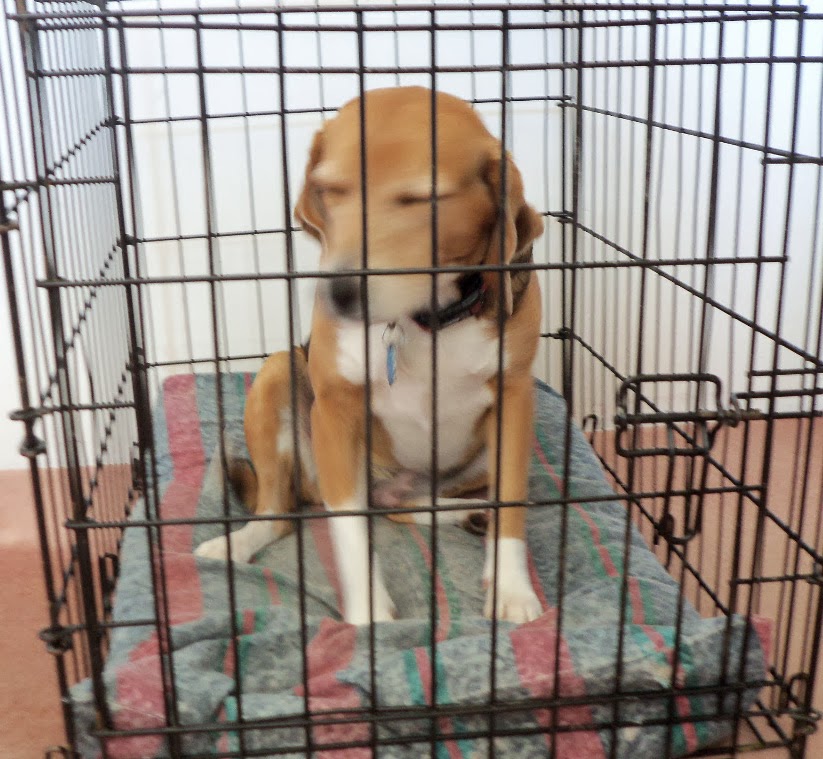 When released, she and Clover immediately race outside, no matter what the temperature, which gives me time to turn up the heat and get their breakfast ready. Since Coco is on a diet  (she arrived very overweight) she is always frantic to eat and gobbles up her kibble by the count of barely six. Clover takes much longer to eat her kibble, and stands pathetically aside if I don’t stop Coco from dashing over to eat it for her.
The next chore is to empty the wood stove’s ash tray, usually overflowing with the previous day’s ashes.  The tray is much too small so it must be done daily. Donning  my coat, boots, hat and mittens, I head out with the dogs to the front meadow with the tray, making sure the wind is in the right direction as I dibble out the ashes.

Then it’s up to the sheep  barn to fill the manger with a broken-up hay bale for my flock of four.  Intrepid doesn't think much of hay and always blatts, begging for Graaaaaain!  In the days when we had pregnant ewes, we gave  them grain every day in the winter, but this frugal farmer thinks just a couple of big scoops a week is sufficient. 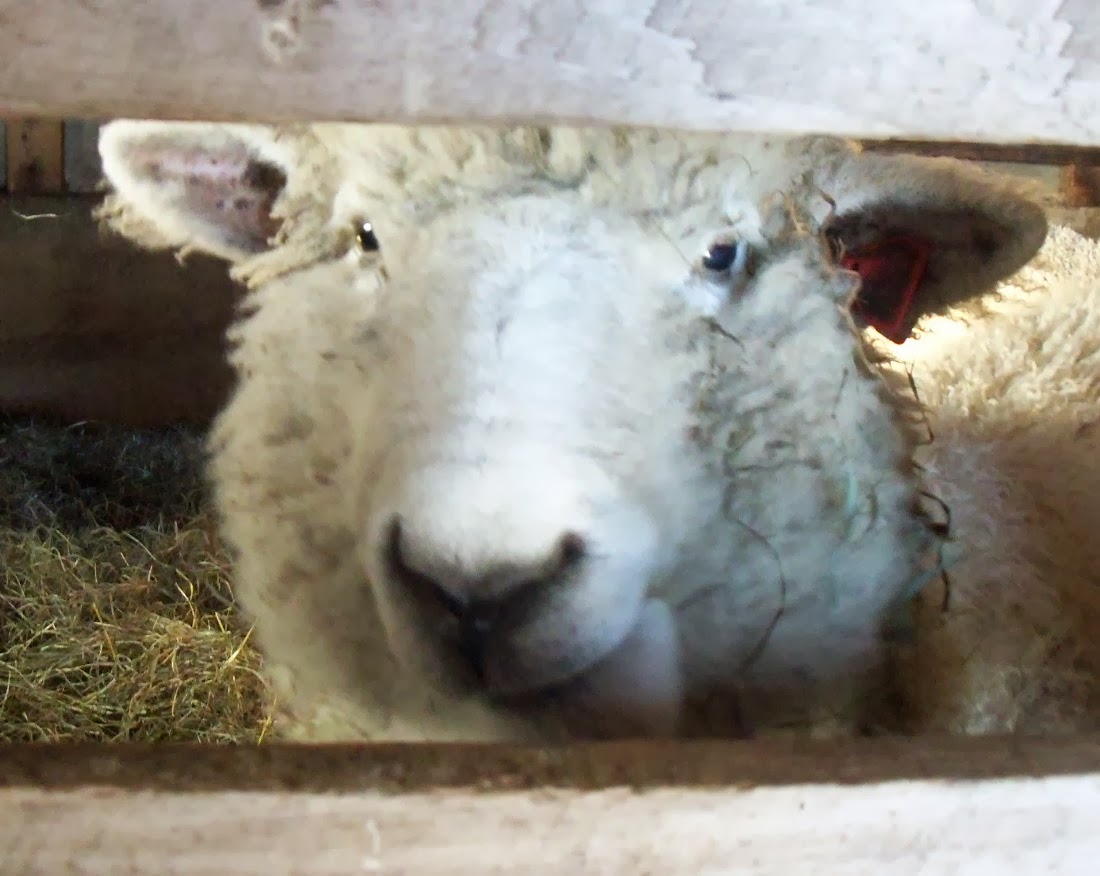 Next chore is to fill the garden cart with a big load of firewood from the long shed. This job used to be sort of fun, piling the wood  tidily into the cart, but since John has split all the limbs of the dead walnut and  maple that were both cut down this fall, it is pure frustration.  There’s no stacking these awkward pieces of firewood.  But I’m not complaining.  How many sons-in-law would be happy to split that much wood on their day off? 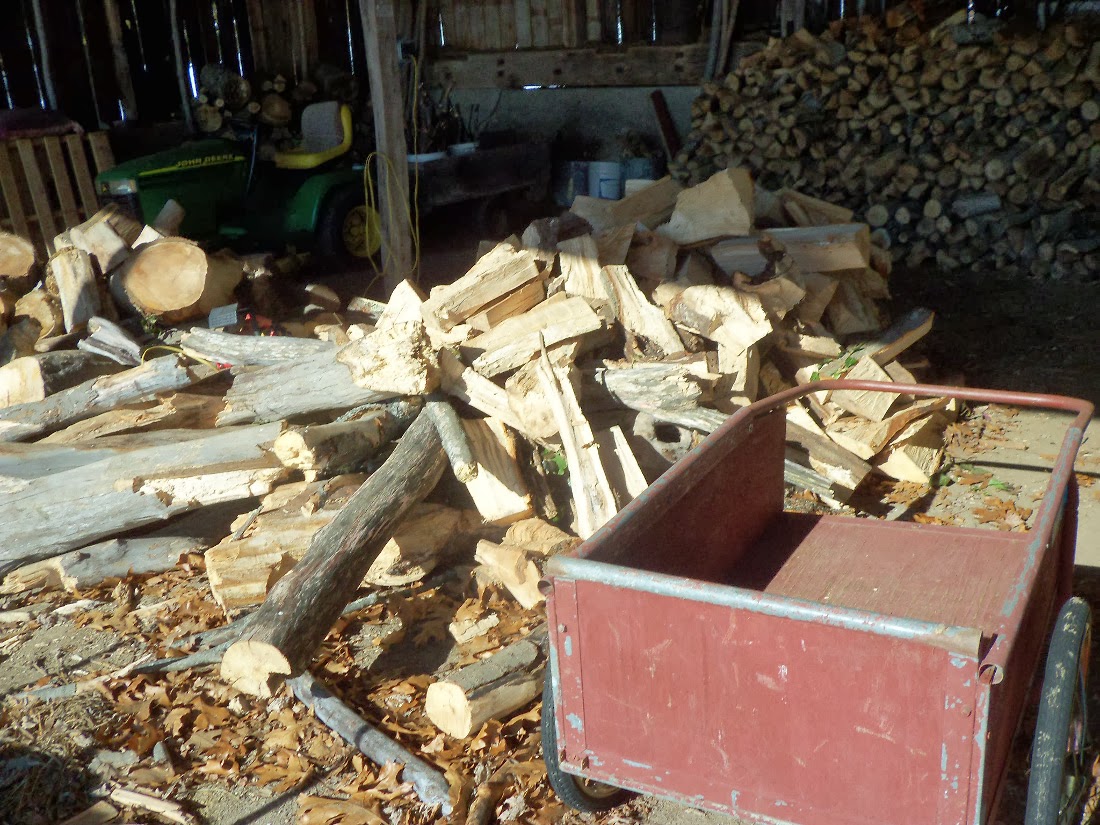 Pushing the garden cart down to the house is still easy as the snow is pure fluff, but first I go over to  check out the guest house where some of the house plants I  recently wrote about live and thrive on the cool temperatures of a solar-heated building.  The first year after Hank died, I didn’t know enough to drain the water pipes so they all froze.  Now I bring up a gallon of water from the house to water the plants each week, but  today I  just wanted to check my camellia.  I guess it was too scared by today’s temperatures. It still hasn’t opened even one  of its fat buds.

As I wheel my load of firewood down to the house, Coco and Clover race ahead,  waiting to get inside, and soon are both basking in the sunlight of the living room.  Lucky dogs! 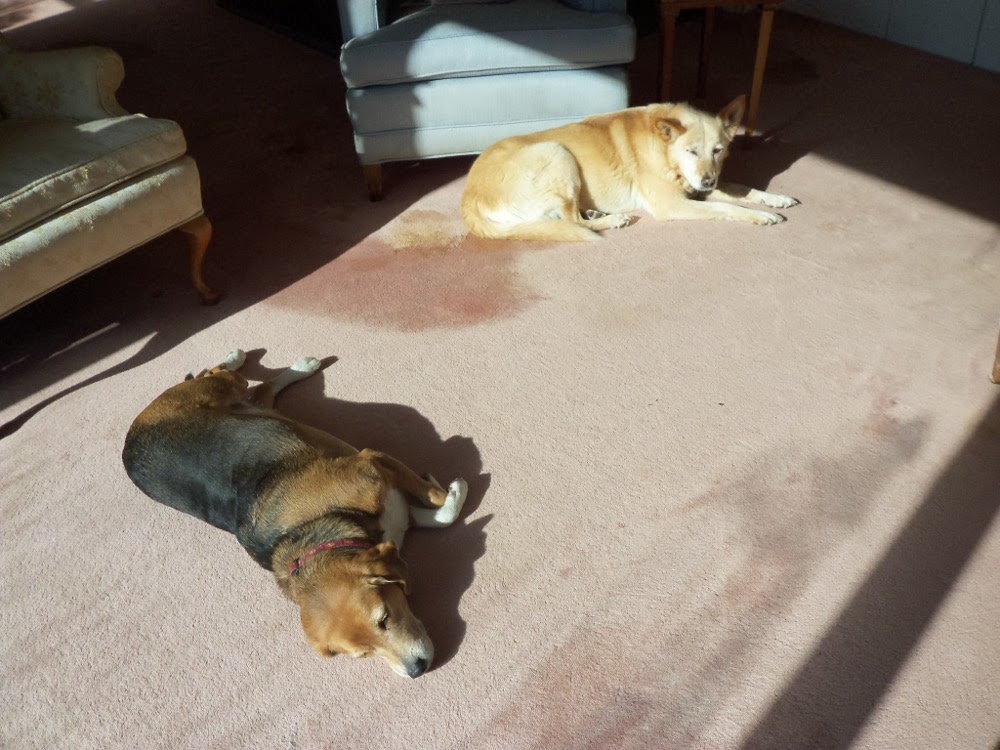 I, on the other hand, still have chores, the next one, bringing in the bird feeder to be refilled, This isn’t usually needed every day, but I only have one feeder, my other two destroyed by bears several years ago, and the freezing weather has  turned the birds into serious gluttons.  Besides dozens of titmice, chickadees and sparrows, I even  have two brave goldfinches fighting over the seeds. 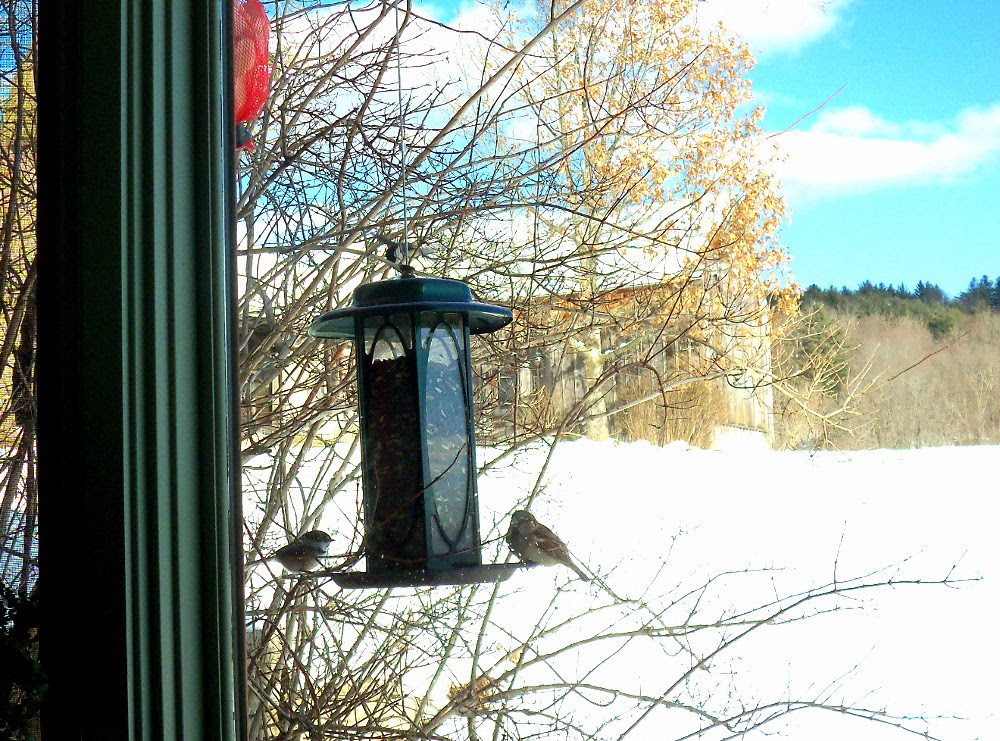 OK, time to fill the wood box. Years ago Hank built a wood box on wheels that sits next to the wood stove, so if I push it to the front door and hook the door open with a coat hanger, filling the box is easy.  I  just try to forget how sloppy it looks with all those crazy-shaped logs.  Then I roll it back to its place by the wood stove and hopefully remember to replace the empty ash tray. 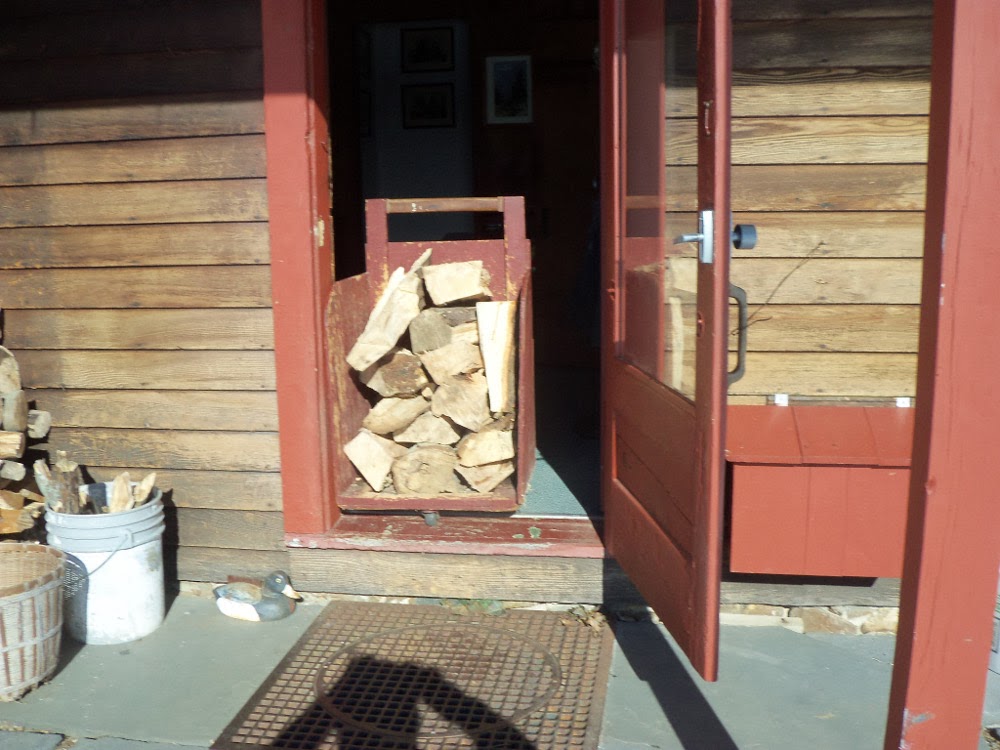 Before I remove coat, boots, hat and mittens, I fill the bird feeder and hang  it back up.  Then it is time to clean the glass of the wood stove’s window which is always black with soot. There’s no need to do this job, but aesthetically I find it worth the effort, and fortunately I have a wonderful glass cleaner called  Fireview made by Spray Nine that gets 90% of the window clean with ease. The rest  I scrape off with a razor blade. 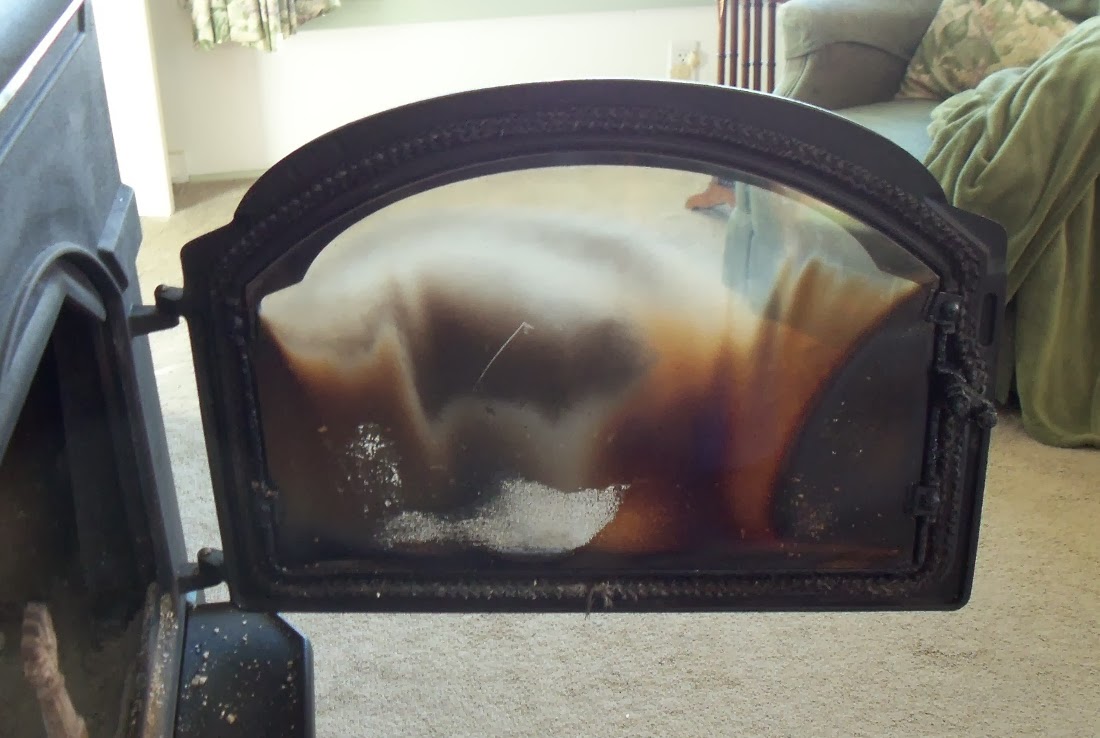 Next chore is to get  a fire started, a job that took many failed attempts before I learned how to open the drafts, fill the stove with enough rumpled newspaper and a pile of kindling so the fire wouldn't fizzle and die. 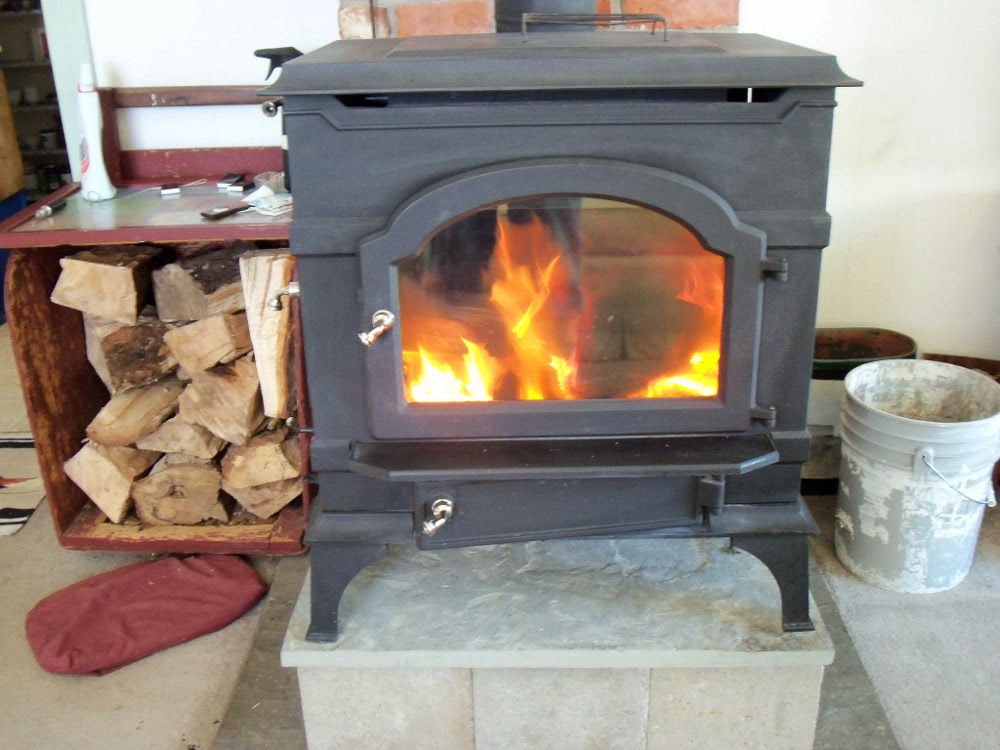 Once the fire is roaring and the room begins to get toasty, it's time for a cup of coffee and a relaxed reading of the rest of yesterday's Wall Street Journal.

Have I bored you to tears?  This column was so easy to write, I hope you’ll forgive me.  Before the day is out I assume I will  get the camera and take a few pictures, and if necessary,shovel some snow   I hope your winter chores are less time-consuming than mine.
Posted by Weeds and Wisdom at 11:49 AM