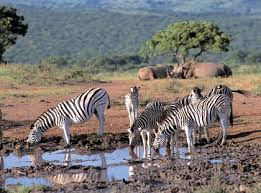 Ah, it was such a nice white Christmas here in New England,   I hope you all enjoyed it as much as my dogs and I did.

Unfortunately we now must get through a month that is cold and  bleak,  its only  accomplishment the January thaw that gives us a tiny taste of spring.  Hank and I always tried to manage a vacation at this time of year - lying on a  warm sunny beach in the Caribbean instead of shoveling snow and starting the wood stove each morning.

This January  I will be right here on Locust Hill where today's temperature is 11 below zero!  So I  thought  you might enjoy hearing about  a nice warm vacation Hank and I took many years ago, not in the Caribbean, but in South Africa! It was by far the most exciting vacation we ever took, but it was back in 1995 which may be a little risky as my memory for things that occurred more than 15 years ago will undoubtedly be limited. Fortunately  I have pages of photos to hopefully fill in the gaps.

Unlike taking a safari in hopes of seeing elephants, lions and other exotic jungle animals, we chose to rent a comfortable cabin in Kruger Park where it was guaranteed we'd see not just elephants and lions, but giraffes, impalas, wart hogs, ostriches – you name it -  by driving around the park in our car.

Sad to say, I've just discovered this is no longer allowed. You ride everywhere in large tour buses. In fact from what I've just read on the Internet, I would hardly recognize Kruger Park at all. Nowadays the accommodations are very fancy  and so are the prices.

I suppose I shouldn't be surprised about the tour buses, since two seconds after we entered the park we were confronted by a very large animal with marvelously curly horns who stood in our path aggressively stamping his hoof.  With our Field Guide to African Wildlife still in a suitcase, we had no idea what kind of beast this magnificent specimen was.

As I  got out of the car to retrieve the field guide, I heard a loud voice say “Please get back in your car!”  and whirled around to see a large uniformed man pointing at the sign I hadn’t seen. “NEVER GET OUT OF YOUR CAR.”  After much embarrassment and many apologies on my part, the ranger explained the dangers and kindly stood guard while I rummaged through the suitcases for the field  guide. He then found me a photo in the field guide of the Greater Kudu, who by then had disappeared.  We never saw another Kudu, but the field guide had a nice  picture. 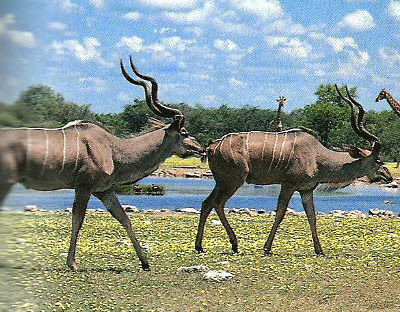 By the time we’d signed in and found our cabin, we’d probably seen a dozen different animals -  herds of impalas and wildebeests,  zebras that danced across the road in what Hank called "their silly pajamas,"  and our first glimpse of a giraffe!

Our cabin was very simple, one room with table, fridge, sink, two beds, plus a bathroom, and a porch with chairs and a grill for cooking.  We’d stopped at the store which offered a limited supply of food and bought a pound of hamburg and some fruit, so when we got the grill tooled up, Hank opened the hamburg.  As you can see, it turned out to be a package of sausages! 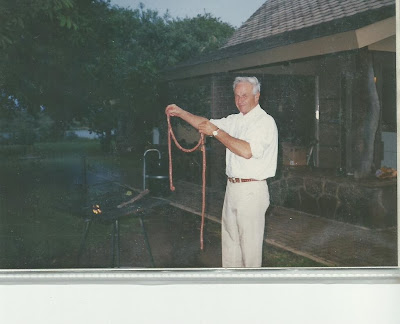 Despite a 14 hour plane ride to Johannesburg and the long drive to the park, we got up at dawn the next morning as we’d been given directions to a nearby watering hole where we could see a large variety of animals at the start of the day.  We sat in the car and gaped as one variety of exotic animal after another appeared.

A group of six giraffes, my favorite of all the animals we saw,  were already clustered at the water’s edge.  Our parked car didn't disturb them at all, but they took turns between drinking and keeping guard for each other, as being down on your knees with your front legs spread wide (how giraffes manage to drink)  is a dangerous position to protect oneself from attack. It’s also hard on a giraffe’s blood pressure.

Fortunately giraffes need very little water, only drinking every two or three days as the acacia leaves (their favorite food) contain plenty of moisture.  There were no young calves in this group.  When a calf is born it falls a good six feet to the ground, but is up and walking within just a few minutes. 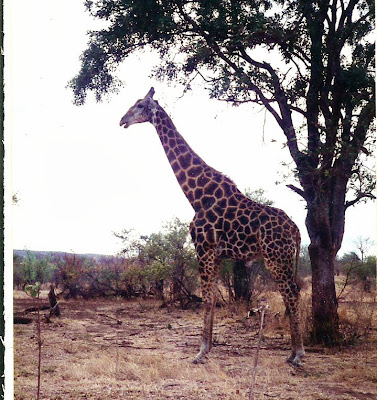 Besides these marvelously tall creatures, there were wildebeests, definitely the homeliest animals in the park, plus many zebras and other four-footed animals we couldn't identify, but no elephants, a big disappointment for Hank.  What topped off the morning was the sight of a mother hyena who arrived at the far side of the water hole with her seven cubs, unfortunately too far away for a good photo. but we had no trouble getting this unusual turtle we later learned was a leopard tortoise! 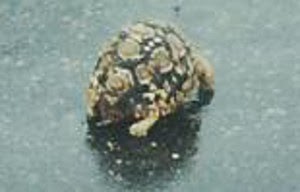 As we headed back to our cabin we passed a dozen termite nests that looked like tepees, put together with rocks and dry sticks. We never saw any termites, and eventually found out they were the insects who had constructed these weird houses. 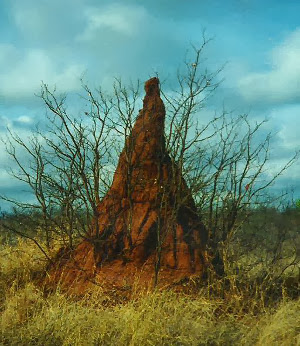 Of course we saw dozens of  birds, but I'm afraid neither of us were bird experts.  The birds I enjoyed seeing most were the ostriches, grotesquely uncoordinated creatures, unable to fly properly, or even walk with any dignity,  but very amusing to watch.  We also saw two big black hornbills with bright red heads flapping their huge wings in an obvious fight over the female who complacently watched them from a safe distance.

One day we saw a huge collection of birds' nests similar to those of an oriole. We finally spotted the bright yellow birds who were busy building the nests, one right-side up and the other upside-down. They made soft hissing noises as they worked. We later learned they were golden masked weavers, famous for their ability to construct such intricately woven nests. 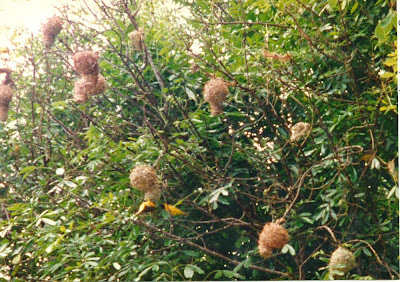 I think it wasn't until the third day that we finally  saw our first elephant, so enormous it took my breath away. 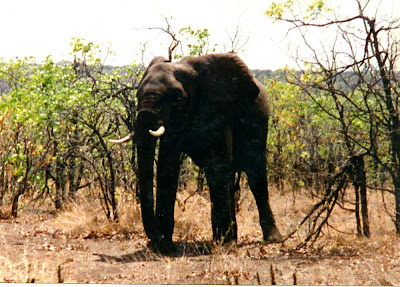 Thank goodness we’d learned not to get out of the car, as this giant proceeded to stalk right into the road and stand directly in front of the car, flapping his enormous ears and trumpeting loudly.  He looked as if he would soon charge us and crash the windshield. 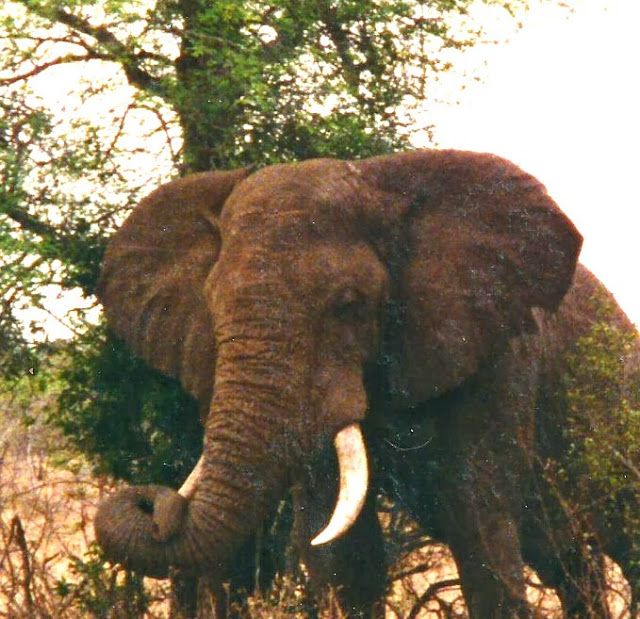 When he finally finished trumpeting he reared up on his hind legs, gave one more angry bellow, and much to our relief, stalked back into the jungle.  The photo below is  not of Hank and me, just one I found on the Internet,  but it gives you an idea of what that experience was like! And the reason Kruger Park no longer lets its guests drive their own cars! 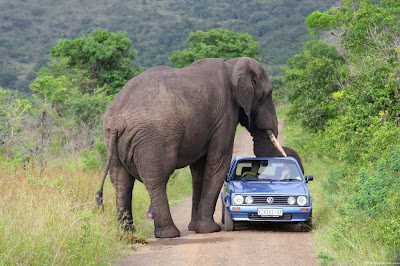 We saw plenty of elephants after that, once even a huge herd which included at least three babies all trying to keep up with their mothers.  We also saw monkeys every day, some brown, some black, some sleek, some furry.  It was always such fun to watch their acrobatics  that we forgot to take any pictures of them.

The most beautiful animals we saw were the impalas, who usually travel in a flock.  They are incredibly graceful and delicate,  their brown coats  short and glossy with immaculate black markings on their faces, backsides,  just above their hooves and on the tips of their ears. Only the males have horns, handsomely curved. 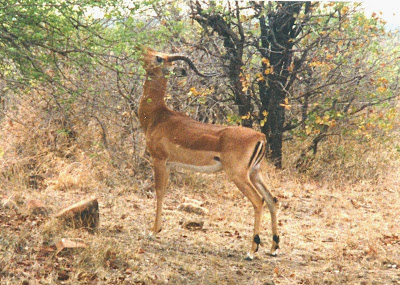 The only way to see lions in tghe park was to take a tour bus in the early morning.  We shouldn't have bothered as what we saw was not even worth a photo - one lion sprawled out asleep in the middle of the road  and another one just standing there yawning.  Below is a photo I took of Cape buffalo taking an afternoon nap.  We also saw resting hippos and crocodiles in the river. 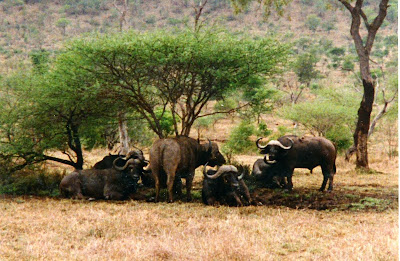 A pretty scary creature you wouldn’t care to meet on a dark night is the one we met on the road one afternoon, a wart hog.  Isn’t he something! He never moved a muscle, obviously wanting us to get a perfect photograph. 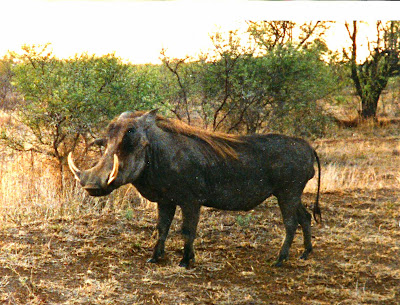 Tired of seeing all these exotic animals?  I certainly got tired  putting together this column, and was very sorry to learn about all the changes in Kruger Park. How lucky that we went 18 years ago!

Posted by Weeds and Wisdom at 7:21 AM