All about Wild Vines 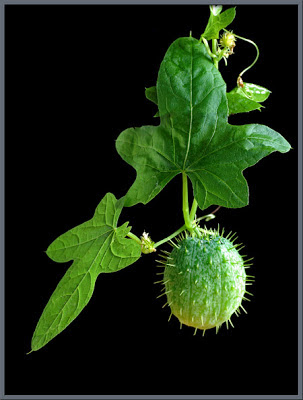 Wow, it's already December?  2012 has been a difficult year. and I'll be glad when it's over.  I shouldn't complain, especially when I think of the devastation caused by Sandy which missed my corner of Connecticut, but I am not feeling very Christmassy.  Since 1982 when I started  writing Weeds and Wisdom, I've probably  composed at least 30 Christmas columns -- , choosing the tree, trimming the tree, family traditions,  making wreathes, lights and decorations, gifts for gardeners -- so I’ve decided to ignore the coming holiday and write about vines today.


The first vine, however, is one whose seed pods  can be used at Christmastime, the wild cucumber vine. When my kids were little we always went out and collected these unusual seed pods to hang on our tree, spray-painting them silver or gold.


I went out to find a few for this column, but I couldn’t scare up a single vine, so I went on the Internet to get a photo. At first I got nothing but pictures of big edible cucumbers, and when I finally found the one above it had obviously been taken too early in the year to look at all like the lovely lacey net that makes a good Christmas decoration., but none of those could be copied.

If you go on the Internet and google Echinocystis lobata, the wild cuke's Latin name, you'll see lots.   I'm no horticulturalist and rarely use Latin names for plants, but found this one amusing,  It translates into  the Greek words for  bladder and hedgehog. The vines grows fast and has dozens of white clusters of bloom all summer.  It makes a nice screen to shade a sunny porch or hide that ugly propane tank in the back yard and other unattractive objects.


Few gardeners plant wild vines, preferring to buy cultivars such as  clematis, silver lace or trumpet vines, but for many years I made do with whatever grew wild on Locust Hill – woodbine, which turns a handsome red mingled with clusters of blue berries each fall,  wild honeysuckle that fills the air with perfume, or – DON’T’ EVER DO THIS  - the nightmare of bittersweet, a rampant uncontrollable vine that strangles anything it can climb.


The one cultivated vine I grew back then was English ivy, but only because my grandmother had beautiful ivy beds and I could make root cuttings from her vines by just sitting them in a glass of water for a week or two.  Yes, ivy climbs, but it should only be allowed to do so on brick or stone buildings, so like my grandmother I planted mine as a border.

The leaves looked lush and green all summer, but because they faced south they are exposed to harsh sun and wind in the winter, so each spring I face dried up brown leaves until the shiny new ones appeared. If grown on the east, west or north side of a house ivy gets little sunburn, and if you’re willing to protect  ivy you’ve planted in a southern exposure with pine boughs or burlap each winter, this problem is eliminated.


My grandmother’s ivy beds looked lovely each spring as her gardener performed the tedious task of covering them from winter burning. I suppose I could protect  mine each fall, but I think I’d rather put up with brown leaves than a mess of burlap right by the front door.

The Baltic and the Bulgarian varieties of English ivy resist burning, but by far the best variety of all is one you may never have heard of, 238th Street Ivy.  It was discovered on 238th Street in Manhattan and was introduced by the New York Botanical Garden where it is grown in extensive beds.


One of my readers brought me two little containers of this fancy ivy after I’d written an ivy column and  complained about winter burning.  I planted them under the sugar maple in the front yard where they faced lots of harsh winter sunlight, and promptly forgot about them.


Two years later I suddenly noticed that two or three stems were busy climbing the maple’s trunk and had already reached higher than my head.  It had been a hard winter, but there wasn’t a single brown leaf on these vines. 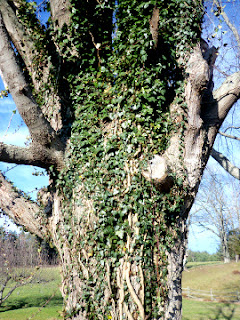 Sad to say, that beautiful maple tree started to die about six years ago.  The two different tree surgeons who inspected it could find no reason for its dying limbs and offered me no solution, but both assured me that the ivy was not the cause.  They each gave me an appallingly high estimate of what it would cost to cut down this very large tree.


My solution is slow but cheap. I have a wonderful yard man, Steve, who comes for  an hour or so a week to do the "man chores", mow the steep banks around the pond, lifting rocks I can’t lift, fixing mechanical problems.   He handles a chain saw with great skill, so when there’s nothing more important to do, he cuts off a dead limb or two that I saw up for firewood.  As you can see above, the 238th Street ivy loves this tree.  When Steve has cut off all the limbs, I'm hoping it will make a lovely covering for the trunk.

I think you must make a visit to the New York Botanical Garden if you’d like to buy 238th Street ivy, but if you want a bed  of this handsome vine on the south side of your house, it would be worth the trip. Or better yet, put it on your Christmas wish list.
Posted by Weeds and Wisdom at 4:28 PM