Farewell to the Joys of Summer


Weather is such a safe topic of discussion in .  I sometimes wonder what people talk about in sunny .  We have infinite variety here in the East – dramatic thunderstorms, heart-stopping rainbows, exhausting heat waves, exhilarating blizzards.

Even our change of seasons offers good conversation -  the first heady days of spring as the earth turns green; the lazy, languid days of summer; the precious days of autumn when we soak up the turning of the leaves and the last harvests of fresh vegetables and flowers.

You can’t really argue about the weather, just rejoice or complain.  Mother Nature goes right on about her business.  Even discussing a coming hurricane or a winter blizzard is pleasant compared to talking about the candidates in the coming election.

I have to admit that knowing Jack Frost will soon return from his summer vacation is a bit of a downer. Seeing a flock of sparrows gather in the locust trees to discuss the best route south or watching the last golden maple leaf float to earth make me feel as melancholy as the cricket’s sad lament.  How much I will miss the sweet smell of new-mown hay, the fun of picking bouquets for the house and vegetables for the table, playing exhausting but delightful tennis games.

This may sound silly, but one of the things I will miss the most will be fresh corn on the cob.  Oh, I freeze plenty for the winter, but it doesn’t compare.  I don’t grow corn since the Fords who rent my pastures and hay fields let me pick mine straight from the vast acres of corn behind their farm stand. 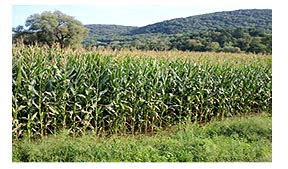 I can’t remember eating corn as a kid.  What I do remember is hiding under the branches of a bridal wreath bush in the backyard and pulling the dried silk from a few ears with my cousin, stuffing them into a corncob pipe and puffing and coughing.  Do you know what corn silk’s real purpose is?  Each of those pale yellow threads is the style of a female flower.  If you think back to your school days you may remember that the female flower is called the pistil and consists of an ovary, a style and a stigma.  Deep within the immature husk, each filament of silk is attached to an ovary, which will grow into a kernel of corn when fertilized.

At the other end of each silk is the sticky stigma, waiting to catch a grain of pollen.  Under a microscope the thin strands look like feathers, each one covered with tiny hairs.  Since there are close to a thousand kernels on an ear of corn, there are also a thousand silks, which anyone who’s husked corn well knows.

The male flower is the tassel that blooms at the tip of the corn stalk.  It is made up of hundreds of pairs of spikelets, each pair containing six anthers, each anther producing about 2500 grains of pollen.  When a grain slides down each silk it fertilizes an ovary, turning it into a kernel.

That plethora of pollen is spread by the wind and can travel hundreds of miles. It isn’t fussy about where it lands, but happily most varieties of hybrid corn will not accept pollen from a different variety. The one exception is pop corn. 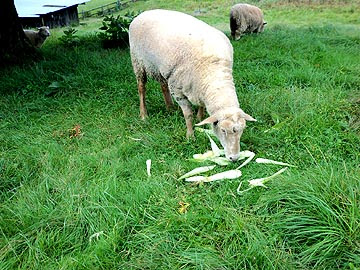 My sheep love eating all the husks as I strip them from the ears.  Mmmm.  Almost dinner time.  Guess I’ll drive down and get two or three ears for my dinner.

Posted by Weeds and Wisdom at 1:08 PM