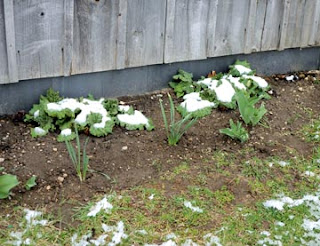 What a silly little snow we had last week, but it was hard on all the brave baby crocus blooms and eagerly dancing  daffodils who were fooled by the weather. One plant that had no trouble with that bit of white stuff, however, was the rhubarb pictured above, which pops up even faster than asparagus each spring.

I’ve always considered rhubarb a fruit, but even Webster  admits that there’s no clear distinction between fruits and vegetables.  “It has been held by the courts that all those which, like potatoes, carrots, peas, celery, lettuce, tomatoes, etc. that are eaten (whether raw or cooked) during the principal part of a meal are to be regarded as vegetables, while those used only as dessert are fruits.” (The Judiciary worries about such mundane things??)

Botanically speaking, rhubarb is not a  fruit, which is the mature ovary of a flower.  An apple is a pome fruit, a peach a drupe fruit, and a tomato is actually a berry fruit.  But looked at it that way, cucumbers, squash, peppers and eggplants are all fruits, not vegetables.  Brussels sprouts are buds, broccoli is an immature flower and rhubarb, like celery, is a stem.

Whether rhubarb is a fruit or a vegetable is immaterial when it comes to raising a plant or two in the backyard. They are very undemanding plants, requiring hardly any effort on the part of the gardener.  Since rhubarb seeds rarely produce plants true to type, the easiest way to propagate this perennial is the same way you would a peony – by finding a friend willing to divide one of her plants to give you  a piece of the rhizome full of new buds called  “eyes.”

Unlike peonies, however, which should be divided in September, the best time of year to start rhubarb is early spring.   The roots should be planted so that the red-budded crowns are just below the surface, If planting more than one, give each at least a four foot space, and spread a nice layer of well-rotted manure (or some fertilizer) around each clump as they are greedy feeders.

Pick a spot in full sun, but don’t plant your rhubarb in the vegetable garden where their roots may be disrupted by the rototiller.  And don’t put them where you may decide to eventually put the swimming pool or the tennis court when you can afford one, as these perennials are truly perennial, lasting for years.

You can start harvesting a few stalks the second year.  Grasp a stalk near its base and twist it away from the plant rather than cutting it. Leave the thin stalks and the tough outer ones to feed the rhizome.  When your peas are ready to pick, stop harvesting your rhubarb.  If you don’t grow peas… well, you really ought to.  Fresh peas are delicious.

The rhubarb flower stalk with its huge panicle of tiny flowers often grows taller than a man.  Garden books recommend cutting it down before it blooms as it supposedly limits the harvest.  I let mine bloom every year and always have a bountiful harvest. 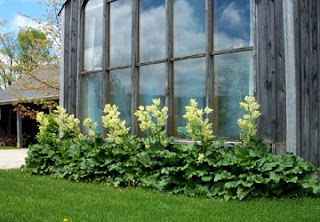 Rhubarb is a native of .  When it was first introduced to the western world a few cooks served up the leaves instead of the stems.  Many funerals followed as the foliage contains large amounts of oxalic acid, a substance poisonous to humans and animals.   I remember one spring when our sheep escaped from their pasture and were busy eating the newly sprouted rhubarb leaves.  They were staggering around, obviously feeling terrible, but fortunately had not eaten enough to keel over and die.

I’m not fond of rhubarb, but Hank adored it and froze a large quantity each year.  One summer several of my relations and I decided to hold a family reunion.  I had envisioned inviting just our generation and our children, but my cousins wanted to include all our relations, going back to our great grandfather Henry Robinson.

When the party grew to over 100 participants, we chose to roast a pig for the event. Unfortunately it was the wrong time of year for fresh applesauce, a must as a condiment for roast pig, so our solution was to buy canned applesauce and combine it with Hank’s frozen rhubarb.  It was quite tasty, but as I stood in line with my empty plate, I overheard a small boy whisper to his equally small friend, “Skip the applesauce.  It’s really stringy!”