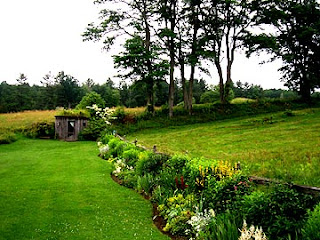 A flower garden  is so enhanced by a good edging, but garden books don't tell you much about this subject or the difficulties encountered in producing and maintaining a good looking edge.  I learned the hard way and hopefully this column will help you avoid my mistakes.
My 100-foor long border was started many years ago with hand-me-down iris, phlox and peonies, iris and feverfew, all given to me by garden friends. It was about 20 feet long, but got longer each year until it extended the entire length of the split-rail fence of the upper sheep pasture. I edged it with bricks. Being a skinflint, I used old, second-hand bricks and within a few years frost had cracked them, weed seeds had found resting places in their cracks and grown up to split the bricks into a useless ugly edging. Frost will even ruin new bricks here in .
I lived with those broken bricks for too many years, right up until 1980 when I redid the border for the first wedding.  Trum, the bride-to-be, wanted to be married in the garden and she not only gave me this information a year in advance, she let me choose the date.  I had an entire year in which to plan and plant the perennials that would look best for a June wedding.
Because the ceremony would take place right in front of the border, I decided I should finally get rid of the bricks and turn the characterless straight edge into a scalloped one, using no edging material at all.  I think it was Hank who had the smarts to suggest laying out the hose in measured scallops  so my edge wouldn't wobble all over the place.  I marked a stake two feet out from the first post of the fence,  another stake five feet out from the second, back to 2 for the third, etc. and looped the hose in a gentle curve from one to the next.
Then came the hard part.  The original border was 3 feet wide.  I removed sections of lawn to make the 5-foot scallops and used them to fill in where the new border narrowed down to 2 feet.  It was an exhausting  job, but the result had until the following June to settle. On the wedding day the iris, lupines, peonies, feverfew and a few brave annuals decorated the border.  In the background 5 curious ewes and their lambs came to the fence to watch the ceremony. 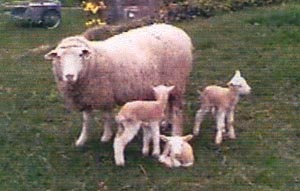 Unfortunately it wasn't until several years later that I finally learned how to make a good edge for that border.  The first lesson I learned was that professionals, unlike yours truly, do not scrimp.  They prepare the soil so that it  slopes up from a two inch depth at the  front of the bed so the lawn mower's wheel rides in the bed.  This allows the blades to cut the grass very close. As a result, the grass has little chance to creep into the bed.   At least a foot or more from the edge is free of plants so they remain undamaged by the mower.
My border had followed none of these requirements.  Plants soon lost their heads as I mowed too close to them.  Grass found the bed's soil  soft and comfortable and happily moved in.  My crisp tidy edge had totally vanished  by the time I learned how to produce a proper edge , and many hours to repair it.  I hope none of you are prone to scrimping  and have a good edge for your garden. It enhances a flower bed almost as much as the flowers do. 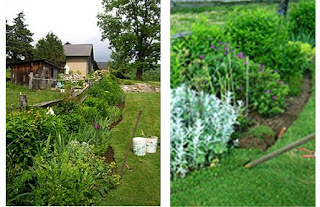 Posted by Weeds and Wisdom at 9:07 AM